Creation of the Save Nature Group

The “Save Nature Group” was launched by two young Germans.

The adventure duo Johannes Leeder, 26, and Georg Lesser, 25, believe that there is still hope for our environment. After visiting more than ten major cities and discovering that finding garbage in public places and in nature in normal, Johannes and Georg were shocked at the planet. Humans are far from nature and the plastic age leaves a trail of devastation in the most beautiful places on earth. Both grew up in the green heart of Germany; the Thuringian Forest. It is one of the few places in the world where nature is about to regenerate, creating new biodiversity. 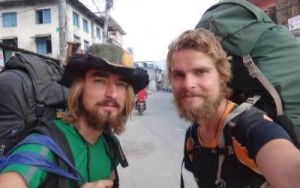 Georg and Johannes, the founders

On the train to Kerala (South India), they observed that people threw plastic wrappers, paper and bottles out of the window without any remorse. Johannes and Georg thought that they needed to do something new and special to make people aware of the problem. This is the start of the story of how they went about their adventure with the Save Nature mission.

Their “come out” came with the idea to build a boat out of garbage, bamboo and coconut nut ropes and then paddling in the backwaters there. They hoisted a flag with the message of saving nature. It attracted a lot of attention. Within a short time they became stars in the Indian media, which motivated many people to change their way of dealing with nature 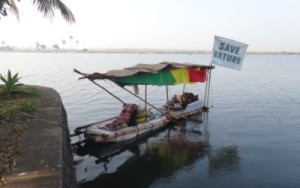 The homemade boat made of bamboo, coconut fiber and garbage

In total they spent 21 days on this boat. The days were long and hard. The nights are short due to the continued siege of mosquitoes. Yet they were not deterred from their mission. While anchoring their boat at a place called Kottayam, they attended a big event called Run Kerala Run. There they launched a call for the conservation of the local nature in front of thousands of young athletes. They met many locals who shared their views on the preservation of nature and recommended them as the first project, the island of Pathriramanal in the backwaters. This island should actually be a bird’s paradise with over 100 different bird species. However, the place they found there with their boat was nothing more than a huge garbage dump, and the bird population on this island had only the shiny crow, which is mainly found where food scraps of human waste are found.

When the two reached this island it was clear that something had to be done. The two bought green garbage bags and started collecting rubbish together with the locals and tourists of the area. Within four days, they were cleaning the island. During this cleaning operation, they talked to the local people, each expressing a desire for more public garbage cans and a functioning recycling system in India. The rural areas in this region do not have such systems. As a result, people are forced to either burn their waste, bury it, or throw it into the backwaters. Therefore, the adventure duo on the island designed trash cans, which should be emptied regularly after consultation with the local community office. After a week’s stay on this island, both paddled further into the city of Kochi, which is the cultural center of Kerala.

The Save Nature Group with its first project in India

There they were invited to give lectures and presentations at local schools and universities, addressing children and adolescents of different ages. They aroused general interest in promoting nature conservation and even motivated other students to set up local nature conservation associations. There was nothing in the way of the growth of the Save Nature Group to become an international conservation project. It has created a crazy imbalance in our environment and if we cannot tackle these problems it can be dangerous. It is important for the Save Nature Group to pass on the knowledge of the industrialized countries about recycling and the proper handling of waste in other countries. Two Germans started their mission in Kerala (South India) to raise awareness in how to treat our nature and our environment. And they were successful.

Green is the way forward. 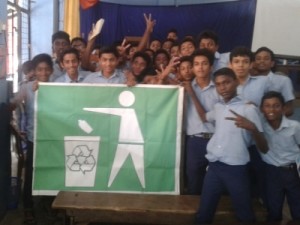 Enthusiasm from the children